What Should Cyclists Do After Sarasota Hit-and-Run Accidents 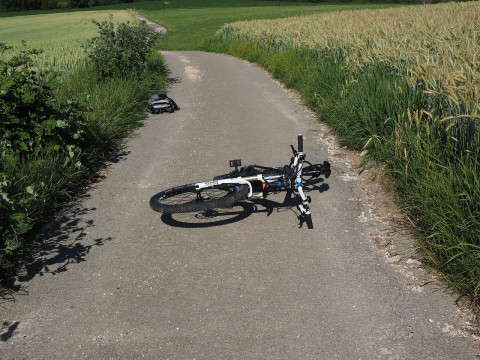 Imagine you're riding your bicycle on a perfect sunny weekend morning when a vehicle emerges and hits you from behind. Suddenly, you're in the air, arms flailing and all. And then you hit the pavement hard. You see the driver speed off as you lay there writhing in pain - your knee is oozing blood, and your ankle is turned sideways. OUCH!! As for your bike, well, it's a story for another day. Your mind starts to race as you wonder what you need to do.

For starters, you can read about Sarasota fender benders and other minor accidents here. Meanwhile, being involved in a hit-and-run means your chance of recovering financial compensation could go up in smoke if you don't act fast. So, if you're ever in such a situation, here's how to handle it:

Your best bet in a hit-and-run accident is to involve the police. If you're in a position to, call the police immediately. They will come to the accident scene, collect evidence, and speak to witnesses. This way, they could identify and apprehend the driver who hit you and disappeared.

If you can't call the police because you have been knocked unconscious or cannot communicate, someone else should do it for you. The responding officers will file an accident report, which will come in handy later, as you'll see.

And if you're not badly hurt, take photos of the spot the accident occurred. Gathering evidence of the crash could help prove your case later. Alternatively, request a family member or friend to head over to the crash scene and do so on your behalf.

But as much as you want to, never chase after the hit-and-run driver. It could put you in more danger. Plus, you won't stand much of a chance on a bicycle, anyway, because you might be injured. And the bike, well…Instead, try and get the vehicle's license plate number if you can. If there are witnesses around, get their names and contact information too.

Next, get medical attention, even if you feel okay. Internal injuries could be present, and you might not even know it. Besides, such injuries could take days or longer to manifest; by then, it might be too late. A professional medical assessment is also key in linking your injuries to the accident.

So, allow the professionals to look at you and give you a clean bill of health - or not. While at it, ensure you get a copy of the medical report. It will be instrumental later, especially if you need to file an insurance claim or a personal injury lawsuit.

After your hospital visit, call your insurance company and notify them about the accident. Depending on your policy, you might be covered for hit-and-run accidents.

Let's suppose you have uninsured/underinsured motorist coverage. In that case, your insurer could help pay for your medical bills and other damages, such as lost wages and property damage, up to the policy's limit. Note that you'll only receive compensation if the driver who hit you can't be identified.

You can also call your insurer before heading off to the hospital. The idea is to keep them in the know so that they can help you navigate the claims process and get the ball rolling on your compensation.

4. Get a Police Report

As we noted, the police will file an accident report when they respond to the hit-and-run scene. Get a copy of this report, as it could come in handy later.

For example, you could use it to file a personal injury lawsuit. The report will have essential information, such as the parties' names, contact information, and insurance details. It also contains a description of the accident, the location, the time it occurred, and the names of any witnesses. Plus, it can streamline the process of filing an insurance claim.

5. Consult with A Personal Injury Attorney

It's also advisable to consult with a personal injury attorney to discuss your legal options. An experienced lawyer can evaluate your case and help determine whether filing a personal injury lawsuit is worth your time and effort.

For example, if the driver who hit you can't be identified, your only legal recourse might be to file a lawsuit against your insurer - if they fail to pay your claim or attempt to give you the runaround.

The attorney can also help you navigate the claims process and deal with your insurer. And if the police catch up with the driver - hopefully with the help of witnesses- you could hold them responsible by filing a case against them. Plus, an accident attorney can fill you in on the steps you need to take after the fact.

If you were in the dark before, we hope you now know how to handle such a situation. And by understanding your rights and options, you stand a better chance of holding a hit-and-run driver accountable. That way, you won't be saddled with medical expenses and other financial losses. Thus, you can work to overcome the ordeal and get back to enjoying your life.

What are my rights if I have been injured offshore...
Find The Best Naples, FL Elder Law Attorneys Near ...